For more information about my time as an author, including a blog and free short stories, please visit my author site: AngelaCavanaugh.com or you can find my works for sale on Amazon here

Tagline:  How far will humanity go to save itself?

Brief Synopsis:  When a virus threatens humanity with extinction, the desperate and dwindling number of uninfected seek refuge in a parallel universe. The technology is untested. The other universe is unprepared and one thing is made violently clear: they are not wanted.

Full Synopsis: As a weaponized, fatal virus mutates and threatens to kill all life forms on Earth, Special Agent Williams and the government conspires to send the healthy away. After space travel and going underground are ruled impossible, all that remains is the theoretical technology of an autistic savant: escaping to a parallel universe. But when they travel to the other dimension, their arrival is met with suspicion and hatred. To evade persecution, experimentation, and to save their lives, the Otherworlders must find a way to escape, survive, and outwit Agent Williams’s murderous double.

This short story received an Honorable Mention in the L. Ron Hubbard Writers of the Future Contest.

Synopsis: When Emma is liberated from the mind-controlling effects of a power A.I.’s nanites against her will, she battles withdrawal, and discovers that her brother is determined to destroy the A.I. that she has spent so many years with. Now she must choose between the life she’s known and the brother she never meant to leave behind.

This is a collection of twenty two scifi stories, most around 1000 words long. Enjoy tales of time travel, dystopian futures, apocalypse, aliens, genetic engineering, and much more… Also available on Audible.

I’m excited to be included in a volume of The Future Chronicles.  My story, Auto, asks the question:  what is the “self” in “self-aware”, and what happens when you build a life form designed to learn? 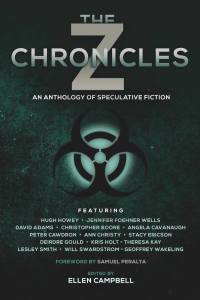 THE Z CHRONICLES/ The World After

I wrote this book for Kindle Worlds.  It’s a short story, and if received well, it’ll be the first in a series.  I am currently working on revisions.

Synopsis: There are secrets in the silo.  Benjamin protects the secrets.  But he doesn’t know everything.  His wife, his sons, his very life, is all in the hands of the sect.  Can he make the right decisions?  Will he ever learn the truth?

Book One, Dauntless, is available at all major online retailers.

I’ve got the first draft of 4 out of 5 of the stories complete, and am working on the edits.

Book 1 – When Stefan discovered the process that would allow humans to hibernate, he never expected that the rich and powerful elite would commercialize it, so that they could extend their youth by only being awake three months a year.  It seems like a great life, until his wife overdoses, and can’t be awakened.  He must try to find a way to cure her sleeping curse.

Book 2 – Twenty years later.  Henry is just like everyone else in his socioeconomic class – he works, almost around the clock.  But unlike everyone else, he has a son that was born addicted to Awake.  In an effort to save his life, Henry has been sharing his Rexful with his son, the medicine that counteracts the effects of not sleeping.  While it may save his son’s life, what will it cost him?

Book 3 – When Nathan’s wife is murdered, his life is destroyed.  He falls deep into addiction, be it poker or Awake.  Can he get his problems under control before he loses what he has left?

Book 4 – Seraphine just awoke for her second eternal summer to discover that her cryo-tech is a handsome young man.  Despite societal pressures, she falls deep in love.  But when she learns that her new boyfriend can’t sleep, she’s torn between following her parents back into hibernation, or rebelling against them, and staying with the love of her life.

Book 5 – Ryder was born addicted to Awake.  After a hard and isolated life, he found himself alone in the world.  Awake took his father.  Sleep took his girlfriend.  He must team up with the scientist who started it all to see if, together, they can cure the overdosed once and for all.

I thought this would be a serial, but I revised it for a contest, and I like it as a short story.  I’m currently shopping it to literary magazines, but may end up self publishing it.

Synopsis:  Even though Max and Alex are brothers, they live in two different worlds.  Alex spends most of his time gathering followers and hanging out in virtual worlds.  Max’s immune system rejected the nanites that allowed his brother to do such things.  When Alex’s bots begin to malfunction, Max must work to save his brother, and in doing so, discovers a conspiracy that threatens all that remains of mankind. 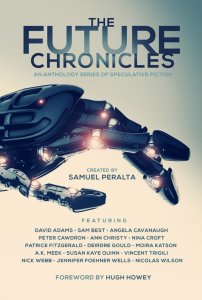 THE FUTURE CHRONICLES / The Assistant

This is a special edition of the series, which includes some of the best stories from the first three editions, and has a number of new stories, including one from me which is currently being adapted into a short film.

By popular demand, I’m currently working on a sequel to Otherworlders.  Many of your favorites will return and some open ended stories will get resolved.

This will be the third and final book of the series.  I have it outlined and will begin work on it once New Worlders is complete.

Some of the feedback I received is that some readers didn’t feel they got to know much about Chase.  He was originally a more central character to the story, but through revision, his part got edited and minimized.  I wanted to let people know him the way I knew him, and so we will be revisiting some of the events in book 1, but from Chase’s perspective.